The patron of the F.O.R.T. is Pie Debye. He was chosen because he was an important Dutch scientist. Or did it have something to do with his love of a filled glass?!?! In any case, we call our room: F.O.R.T. ‘Pie Debye’. 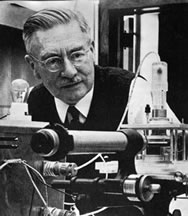 Peter Debye was born in Maastricht in 1884 and after primary and secondary school he went to the Technische Hochschule in Aachen in 1901. There he studied mathematics and physics and obtained a degree in electrical engineering. In 1908 he obtained his doctorate in physics with a thesis on radiation pressure in Munich. In 1911 Debye took over the professorship of Albert Einstein in Zurich, when he accepted an appointment in Prague. Through these studies he eventually came into contact with physical chemistry and chemical physics.

In 1912, he was the first to measure the dipole moment of molecules in solution. As a result, the unit debyes of molecular dipole moments was named after him. Chemists will know Debye best from his Debye-Hückel theory (1923) on interionic attraction, which quantitatively describes the behavior of electrolytes or dilute solutions. He received the Nobel Prize for his contributions to the understanding of molecular structures (i.e. research into dipole moments and electron and X-ray diffraction).

After holding positions at various European universities (Utrecht, Leipzig, Berlin, Göttingen), he moved to the United States in 1939, where he was professor and head of the faculty of chemistry for many years. In 1946 he became an American citizen under the name Peter Joseph William Debye. He died of a heart attack on November 2, 1966.