The F.O.R.T. has had an eventful history, with the big move at the end of the last century as the highlight. Here are some impressions from bygone days:

In the next section an account of the emergence of the R in F.O.R.T. Before this, only crates of beer were placed next to the stairs.

The students were not so happy with the developments. The building for Chemical Engineering is now finished, but there is no easily accessible library in their own building, there is no private canteen and there is no private meeting room. Martine Dols, chairman of the study association Japie: 'You can work well there, but you can't just be there. You get in to follow a lecture and then get out. 'The building does have a number of so-called 'socio-corners', but they are not at all suitable for large numbers of students. Moreover, the tables are not designed for leaning firmly; a number of them have already been demolished and the faculty has finally responded to the students' complaints. Metselaar: 'We are now investigating whether we can accommodate the FORT meeting room in the basement of the FT hall. We will have to negotiate this with TNO. In our opinion, the room should have a separate entrance. We are also talking to TNO about a jointly operated canteen in the FT hall. Another option for a canteen is the high-pressure laboratory, a small building behind the FT hall. We also commissioned an architect to make a small canteen near the two lecture halls on the ground floor, so that the students don't have to leave the building immediately because there are no catering facilities'.

"One week from now, then you have to get out. That was about the meaning of the message that study association Japie heard last year around this time. On 4 June last year it was made clear to them that the FORT, the meeting room of the Faculty of Chemical Engineering, had to be evacuated by 12 June at the latest. As you could imagine, this led to a lot of stress. And that was no less due to the fact that the new chemistry building had not yet been completed. For the time being, the weekly drink had to take place in the canteen of the new ST building. Fortunately for the fervent drinkers, the FORT committee had bought a mobile tap just before the sudden move. This with a view to the coming summer, so that they could also have drinks in the open air. Thanks to this tap they didn't have to miss the drink. In the meantime we are one year on. The new FORT in the ST-hall (the former FT-hall) is still 'under construction'. The old FORT is (just like the rest of the old T-high) in a far-reaching state of decomposition. But out of sight does not mean out of heart. At faculty T, they haven't forgotten their precious drinking room yet. That's why a genuine wreath laying took place on Monday in front of the entrance of the old FORT. In a silent march they walked from the new ST building to the old accommodation, after which the ceremony took place. According to the planning the new FORT has to be finished on July 6th. With a bit of luck the chemistry students will be able to move into their new room during the coming academic year.

Fortunately, the F.O.R.T. also knew heroes. Below their story:

The metamorphosis from old to new F.O.R.T.

The transition from the old to the current F.O.R.T. was a road with many obstacles. Already in the committee year '95-'96 it was Freek Ulkeman who started negotiating with the faculty about the new building. This was continued by Dominique Willaert and the following year by Karen Scholz. As a result of these discussions, the first drawings for a new layout of the F.O.R.T. in the new building emerged. These were made in part by a legend among the drafters and honorary member of Japie, Mark Peeters. The relief was: 'Yes, there is going to be a new F.O.R.T.! 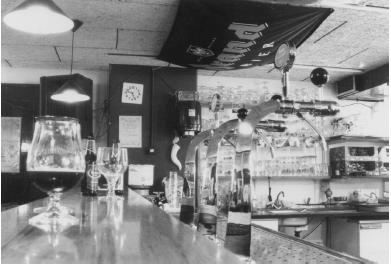 The new ST building came, but there was no space reserved for the F.O.R.T. and the canteen. What now! Everyone had moved, but the consumption of the golden juice still had to be done in the old building. The canteen came fairly quickly and fortunately, because now the next committee ('98-'99), Ellen Donkers and her three heroes, had a room to run drinks with the mobile tap. We had been informed that we had to pull out of T-high. The bar tables in the canteen, the ghetto-blaster of Japie and drinks but in the fluorescent light was the credo. Luckily it could not spoil the fun. Better something than nothing! 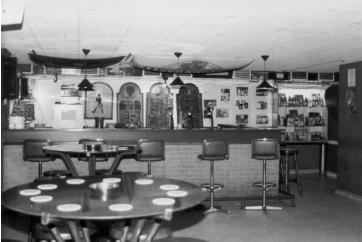 Negotiations with the faculty were difficult, in the meantime a new space had been reserved, but due to the cutbacks of the faculty no money to set it up. Because of the good relations that the F.O.R.T. committees had always maintained with the people in the faculty - still to this day - it was still possible to receive donations from a number of departments through Hans van Rijswijk. Together with the reservations that the F.O.R.T. committees had always made, there was enough money to start building themselves. Brand had previously promised to make the tap and cooling installation available.

In the summer of 1999 the time had come, we were going to start! The Matrix hall was still under construction and that was reason enough for us to have a chat with the supervisor, Wil Ruiter, of this project. This man thought it was great that a number of students, due to limited financial means for a new drinks room, wanted to build this space themselves. Our first very valuable contact had now been made; we could really use his help.

The first job was to lay the pipes for the beer pipes through the crawl space. Just drill a few holes through the concrete floor, you called in your man with the diamond drill - thanks to the supervisor - and drilled four holes of 15 cm diameter. The first result was visible and you already felt like a do-it-yourselfer, even though you hadn't done anything yet. Through the supervisor we came into contact with Jan Jansen van Stork, with whom we went into the crawl space to hang the pipes.at 3 o'clock already at the Beer.... so work hard! another form of Káál.... 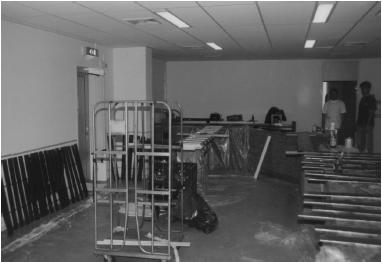 The second job was bricklaying the bar. That was easily said and done, we got some bricks and some cement from a DIY store - although we weren't allowed to cross the street with such an overloaded van with trailer, a new F.O.R.T. was sacred - and started to build. Under the guidance of a neighbour of the always helpful Piet de Greef. After two days of bricklaying there was a bar, albeit without a bar leaf, but still something you could put a beer on, which we immediately did. 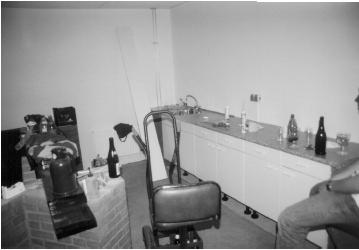 Then we made the elevation behind the bar. Wheelbarrows full of concrete, which had been made in Ronald's cement mixer, went towards our new brick bar, where we dumped our raised floor. Here and there we dumped our raised floor. We had picked up the armaments here and there from the TU site. Then you had to smooth out the mess, up until the knees were bleeding. While enjoying yet another beer we really got the idea of the new F.O.R.T. 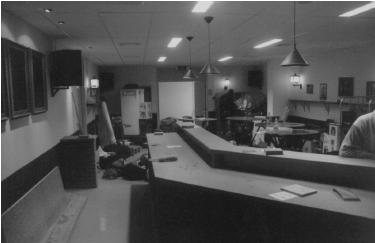 After that we were going to attach Brand-green scraps to the walls.After a couple of weeks of sawing, sanding and painting the Barblad, it's still not there...with Barblad but without the Barblad scrap and the planks for the side walls, we could finally staple the scrap to the wall. This was a bit disappointing, but about a week and a half later it started to look like something.

The hanging phase started, the Brand-lights were hanging smoothly as well as the bar lights. The speakers and the teak planks on the side walls were hung with brute force. They wouldn't fall off easily. Of course, the space had to be student-proof.

Thanks to Paul Weijmans, we were able to assemble a huge storage rack in the storageroom and hang a number of planks. Behind the bar we could also hang the shelves for the large collection of special beer glasses.

It was time again to call in our big friend the supervisor, a nice anti-slip floor as in the lab rooms wouldn't be wrong. We asked, Wil arranged it. Let it harden and evaporate for a couple of days and we could do further jobs.

Now we fixed the spotlights in the ceiling. We sprayed the display case and fitted it with glass plates. It was starting to get somewhere. The time had come to assemble the hardwood bar top, thanks to a roommate, or actually his father. The tube at the front of the bar could also be attached right away. The bar seemed almost complete.

It was time to start tinkering behind the bar, the kitchen unit and the kitchen worktops could be mounted. After we had connected the boiler and a sink ourselves, running water in the F.O.R.T. was a fact. After that we painted the bar and ...

Le moment suprême! Brand came by with drafting and cooling system. The first compliments were in, except for that hardwood bar leaf, which the Firemen did not like too much. But after a day of chores the first beer flowed out of our brand new faucet. Many would follow.

This was followed by the last steps, such as connecting the music system including computer, hanging up the picture frames, price lists and beer boards, hanging up the beer flags and the complete clearing of all F.O.R.T. properties. The new room was ready!

In October followed the opening of the F.O.R.T., where everyone who had helped was thanked for his or her contribution. It was a week to remember, a new milestone in the history of the F.O.R.T.

A few weeks later, the wall behind the bar was sprayed brown-red, because the light yellow wall colors made the room very light, and we were used to a dark den after all. Now the F.O.R.T. was really finished, the art of construction was definitely closed. the new room is DONE, special attention for the light yellow walls and the Time on the clock... 🙂 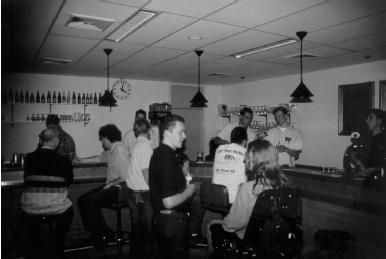 This was our fantastic experience of building the magnificent new F.O.R.T. To conclude, we would like to mention that we invested a lot of time during the summer holidays to build a new F.O.R.T. and on top of that we are very proud that we achieved this with the help of many people.

And thank you, too! After five years you can still see the hard work and the F.O.R.T. is still running at full speed! So that the F.O.R.T. never has to move! Cheers!